Some baseball teams, like the Chicago Cubs, have taken proactive approaches to dealing with racist fans. The Cleveland Indians* have not.

My friend Lauren alerted Cleveland Indians management concerning this tattoo in front of her in the security line: 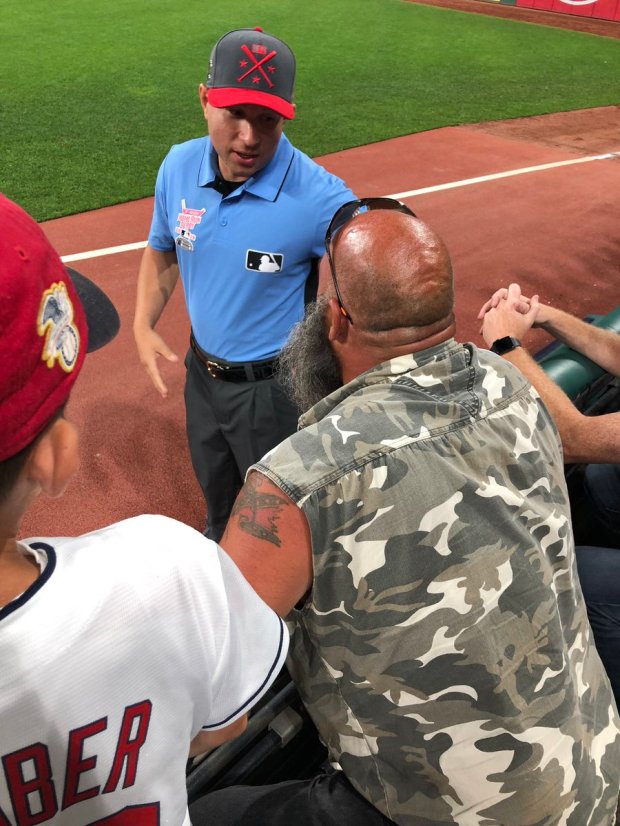 And Lauren got this response.

“Hi Lauren. Thank you for reaching out to the Cleveland Indians. We are very thankful that you and your family are fans of the Tribe. We want you to enjoy your experience here at the ballpark. If you let the usher or anyone in lower fan services aware of this, [sic] someone can be sent to ask the fan to cover their tattoo if necessary. As well, even if you would not want to be re-located, it is possible though to get re-located for that game if you and your family are at the ballpark.”

Not sure where to begin, but this response places the burden of objecting to racism on the fan, not the club or stadium management. It promises nothing even if the fan does speak up, and then offers to relocate the family — even if they don’t want to?

But we shouldn’t even have to ask these questions. As baseball and politics blogger Sarah Sanchez pointed out in our discussion, the club’s fan behavior section provides that “offensive words or images must be covered or removed from the ballpark”.

Stadiums generally kick people out for yelling at umpires, stop serving alcohol late in the games, and even remind people not to swear because kids are present.

I do have a bee in my bonnet, as they say, about hate speech tattoos at baseball games. I think the reason it bothers me so MUCH is that they wore this into the ballpark! It’s no different than a Nazi t-shirt, right? And the onus is on their seatmates to bring this to the park’s attention? Why? They didn’t just draw this on. They wore it in through security, in front of God and everyone. If people can be refused entry for having restricted items in their bags, for being too drunk, for any number of reasons, why don’t we say the same here? It’s not reasonable to expect their seatmates to take a personal risk to document something everyone can SEE and then – what? Raise it with the same management who let them in and seated them? And have any confidence they’ll take an action? And it’s bad! BAD bad. I shouldn’t have to sit near someone who felt SO STRONGLY about being a Nazi that they literally permanently altered their body so everyone would know HOW NAZI THEY ARE. Is this something I should have to address MYSELF?

So, if you’d like to sound off on this to the Cleveland Indians and Progressive Field, all the information to do that is here.

I write about why we should do everything we can to make racists socially uncomfortable here.

Thanks to Lauren & Yusuf for the pictures and the bravery.

* I’m gonna bracket (for now) the question of whether the Cleveland Indians mascot is itself racist (it is).  The fans of clubs with racist mascots deal with that reality in complex and varied ways. This episode is probably connected to such institutional racism in big-picture ways, but is totally worth pointing out by itself.

I’m running for US Senate as someone who regularly experiences economic insecurity. Here’s a little of how that has been so far.

A few months ago, one of my housemates said to me, “You do the Millennial hustle better than any Millennial I know.” What she was referring to is my multiple part-time jobs and freelancing gigs that comprise my part of keeping the mortgage paid and the lights on.

It was funny and kinda flattering (I’m too old to actually be a Millennial, but I often find that they are the folks I most easily connect with). But her teaching me that phrase brought part of her generation’s struggle into sharper focus: the painful reality I experience around not having work and economic stability is so common for her age mates that they’ve coined a term for it. Ufdah.

There’s pain in this reality. The constant hustle takes its toll, some months there isn’t enough and we have to do that horrible juggling act (pay insurance or get car fixed? delay the dentist for another couple months or skip getting new groceries and eat pantry dregs?). If it wasn’t for the Affordable Care Act, I’d be one of the millions of people who live in fear of waking up in the morning will illness rising and nowhere to go; as is, the co-pay and deductible still discourages “good” choices sometimes.

I’m running for office because of that economic insecurity, and because climate disruption is a real and rising reality for all of us, but especially people of color and poor people everywhere. I’m running now because there is urgency to both, and because the rise of fascism needs people to stand in its way as powerfully as possible. And for some reason I woke up in February with the notion in my head that maybe I could stand up more formally and actually run for office.

So I’m doing this thing, and I’m committed to seeing it through, whether that means it is over in 14 months, 17 months or 8 years. And I was in no way “financially ready” for this.

In fact, I almost didn’t run because of money. One of the first things I learned when I started talking to folks who know more than I do about elections is that candidates can’t pull any kind of salary from their campaign coffers until after the primary filing date closes: in my case, because I’m in a state with a late primary, that means June 6 of 2020. So running means adding to my hustle a nearly full time additional job. That pays nothing. For a year. When I’m already struggling.

My next inquiry was, “Can I crowdfund to help keep my bills paid while I run?” And the answer was, “Nope. Any help people give you because you are running counts as a campaign contribution and is subject to these restrictions.” So that modern desperation go-to isn’t even available. (I can’t even publish this article on my own blog because it is on patreon and will be interpreted as an “ask”.)

My response to learning these things was first despair (CAN I do this? How does anyone do this?!?) then analysis (THIS is why we are so under-represented! I’m seeing the mechanism laid bare!) to deeper commitment (Godammit, someone has to do this. Let’s go!)

But I’m dragging other people along. The financial stress in my life was already there and it is shared stress with my family and community-mates. I’m going through waves of feeling anxious and guilty for this choice, which was, after all, my choice first and foremost. And the more I show up as a candidate, the less I’m available to help get that mortgage paid.

I’m also harboring deep fears that this is going to compromise my health. I have chronic Lyme disease, which is held in check by daily doses of herbs and being the party pooper who heads for bet at 8:30 most nights. It’s a precarious balance, and falling off that cliff can mean weeks or even months of increased pain and exhaustion. Plus not being able to work for a while, which just leads to more stress and anxiety as the bills pile up and my partner has to double down on his own already exhausting work life.

Then there is the “birds of a feather” phenomenon: I don’t hang out with millionaires, which makes fundraising for anything a challenge. And I don’t have millions of my own money to throw in to my own campaign. An independent candidate in the last Wyoming US Senate race joked in an interview that his wife had agreed to let him spend $1M on his campaign… but he’d do more if she wasn’t paying attention. Isn’t that sexist and cute? And casually unaware of his own privilege?

Reading that article left me feeling the old shame of being a capitalist system failure. I comfort myself with the story that I’ve always been more oriented toward service than a big paycheck, but the reality is that even if I had tried to play that game in earnest, only a handful of people ever “make it” if they don’t start out in a family with a lot of wealth.

So the crux of the “why” is that the deck is stacked against us, both in general and within the minutiae of campaign finance law. My family is going to go through the squeezebox of economic stress over the next year and a half in the hope that I can win a seat at the table and be part of changing the mess that is our electoral system, and win or lose, being a role model for not accepting the hand we’ve been dealt.

I want public financing. I want Citizens United dead and gone. I want corporate power blunted so that people with a real commitment to the working class and poor can actually stand a chance in our electoral system. And the deeper I get into the stressful, anything-but-justice-based process of running for a federal office, the more fierce that commitment gets.

Yana Ludwig is the author of Together Resilient: Building Community in the Age of Climate Disruption, and is a candidate for United States Senate. She is a founder of Solidarity Collective in Laramie, Wyoming.